The National Library in Kolkata in Alipore is housed in a magnificent building amidst rolling parklands and ancient trees, and has a great history itself.

Once the pleasure palace of the infamous Mir Zafar, Nawab of Bengal, gifted, or maybe forced to gift it, to Sir Warren Hastings, Governor General of Companies India, to be used as his official residence.

Once the Governor General of India’s official residence shifted to the current Raj Bhavan, this became the National Library.

This being very close to where we stay while in Kolkata, we use the sprawling grounds for our morning walks, and occasionally spend time in the quiet and vast reading room browsing over books.

This library has the most comprehensive collection of books in India, and the pride of place goes to the rare books section, housing some extraordinary treasures.

During my last visit to Kolkata, on a state holiday, we took the help of an acquaintance who is a curator of this section, and enjoyed the privilege of an exclusive look at these treasures.

They included many rare manuscripts, some on palm leaves, and others on bark, or very early handmade paper. Some were in fine leather, printed in gold, bound in gold plated leather.

Original handwritten scripts of the Tulsidas and the Krittibas Ramayana, the Koran handwritten by Aurangzeb, and other rare manuscripts in Sanskrit, Persian, Arabic, Pali and Tibetan were there.

There was calligraphy to be marveled at, and specimens’ from the first printing press in India.

The first drafts and working notes of famous novels, letters, diaries, it was a treasure beyond imagination, each item with a story of its own.

But by far the most interesting display with a fascinating story of vanities hidden in it was the original document of the Constitution of India, as signed by the constituent assembly which is on display here.

The story is something that came to my mind, observing the document, and is a logical deduction with a bit of imagination based on what is known of the characters involved.

The final page of the document bears the signatures of all the members of the constituent assembly in two rows.

By the time this was ready to be signed, the British colonial masters had officially left the sub-continent, putting in their place their erstwhile cronies in a divided country, partitioned over the blood of millions of its citizens, leaving scars that generations have not healed. Two products of Macaulay’s endeavor to create coconuts, brown outside and white inside, Nehru and Jinnah, were ruling over the torn out parts. 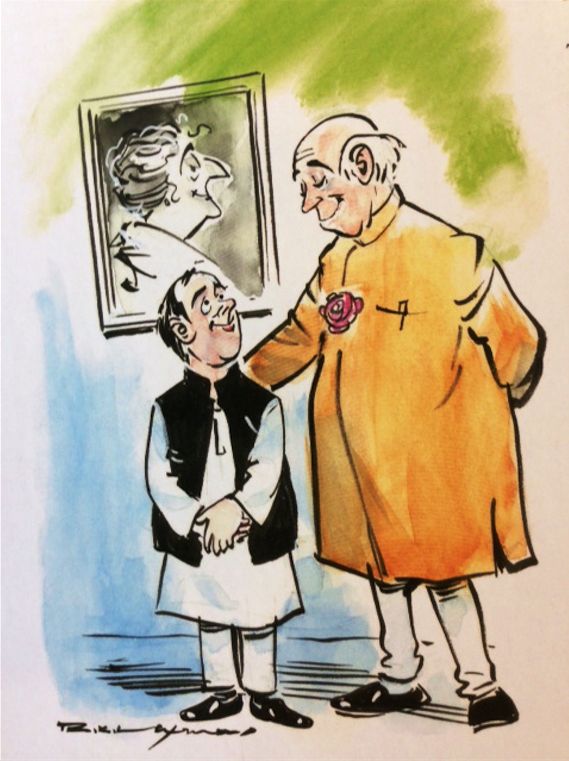 Jawaharlal, the nation’s Uncle, first Emperor of the Dynasty was on the throne. Wags said that his move from the mistress’s bed to the master’s throne was a demotion of sorts, but that is not part of our story.

Therefore, when the document came up for signature, Panditji, with his inborn sense of entitlement, signed it first, as the first signatory.

However, in his hubris, he had made a faux pas, breaching protocol.

For the titular Head of State of India was the President, Babu Rajendra Prasad. And as he was technically and officially the senior member of Government, he should have signed first.

But this occurred neither to the sycophantic babus and party members who put up the document for signature, nor their newly appointed chief.

But the President was upset at the slight to his stature. And he was not a person to meekly submit to the insult.

He therefore, drew an arrow to the top, besides the text, and signed his name.

Thus, his name came on top, even if not in the place designated for signatures.

And the original document, till this day, bears witness to this little vanity fare, and preserves it for posterity.

Ironically, this document proclaiming India’s independence from the British, signed by the inheritors to their throne, is housed in the building built by the puppet nawab of Bengal, the notorious collaborator Mir Zafar.